DxOMark published their objective measurements of our favorite camera in the world, the Canon 5DS-R. As usual, the media has taken the (largely meaningless) “Overall Score” measurement and used that to rank the camera. Here’s a headline from a page I like, SonyAlphaRumors: 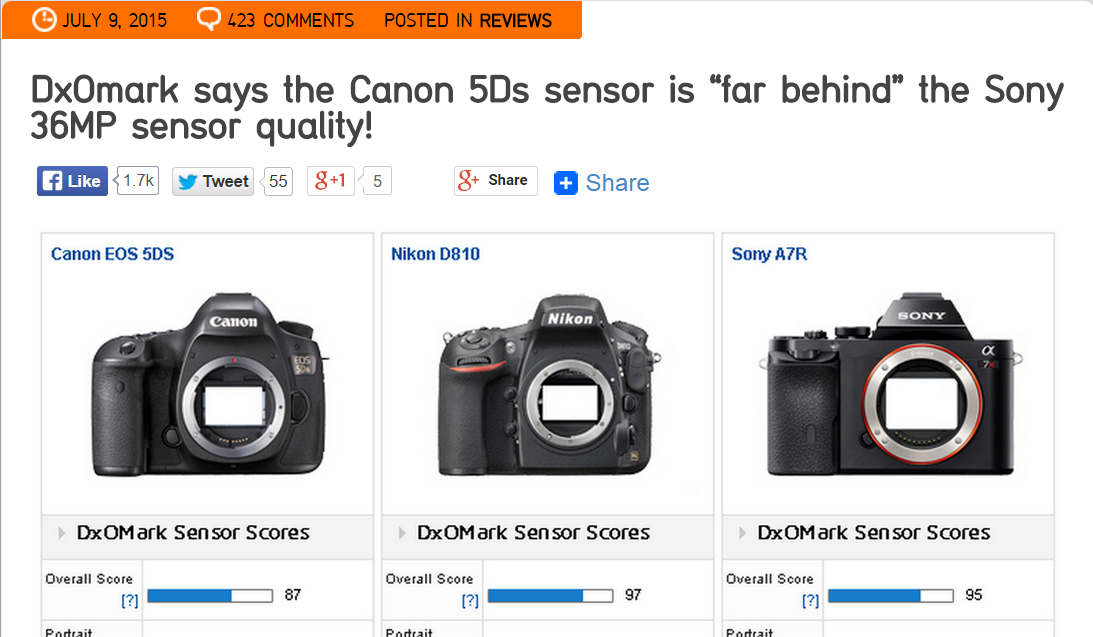 Based on those numbers, the 5DS seems to be about 10% worse than its competitors… but it’s not that simple. Here’s a summary of what we found in our reviews and our previous experiences:

But we don’t disagree with DxOMark, just the presentation and interpretation of the numbers. We’ve covered most of this before, in the How To Use DxOMark video:

Both these factors are considered when DxOMark publishes their lens sharpness measurements with this camera, but they haven’t yet–but nobody in the media has mentioned that we have incomplete data and should wait until they finish measuring.

I don’t mean to imply that the 5DS-R is better than the D810 in every scenario. The D810’s ISO 64 makes noticeably cleaner images for landscape and studio photographers, and if you have to recover shadows, the D810’s recovered shadows are cleaner. You can create HDR-style images from a single frame from the D810; it’s amazing.

Here’s DxOMark’s noise chart. Notice that the orange and red dots mostly overlap, but that left-most red dot is just for the D810. The D810 supports ISO 64, but the 5DS-R does not, so when you have enough light (or you’re using a tripod), the Nikon gives cleaner images: 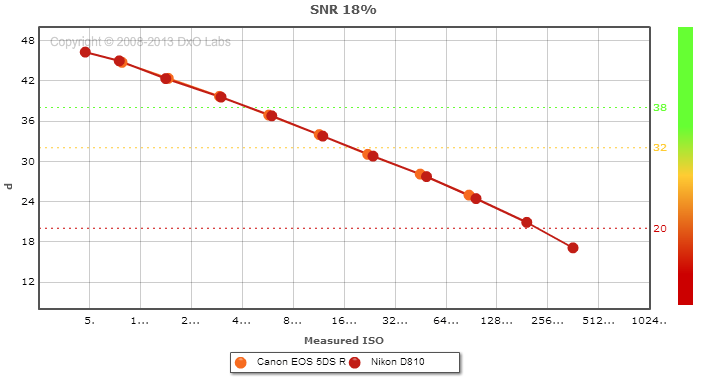 Here’s the chart showing the dynamic range. Notice that the orange 5DS-R is FAR below the D810, until about ISO 800. Note that dynamic range only impacts your picture if you raise the exposure in your photo in post-processing, or if you raise the shadows. So, from ISO 64 to ISO 400, the Nikon images will handle those specific post-processing tasks better than the Canon. You won’t notice much difference at ISO 800 and above, however. 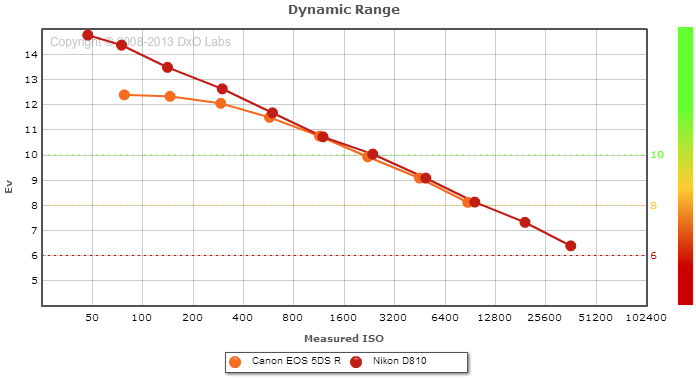 Here’s our most important finding: after post-processing, it’s almost impossible to tell the difference between the D810 and 5DS-R. The extra detail lets you crank up the noise reduction on the 5DS-R, allowing it to give similar shadow noise and detail as the D810, eliminating the benefits of the D810’s lower noise and better dynamic range. On the D810, add a bit of sharpness, and we couldn’t tell the difference in our blind tests, even though sharpness doesn’t truly add detail.

So, how do you pick between the 5DS-R and the D810? Pick the Canon or Nikon lens system first, then get the body that matches. Glass is generally more important. Then, stop looking at charts at start shooting.