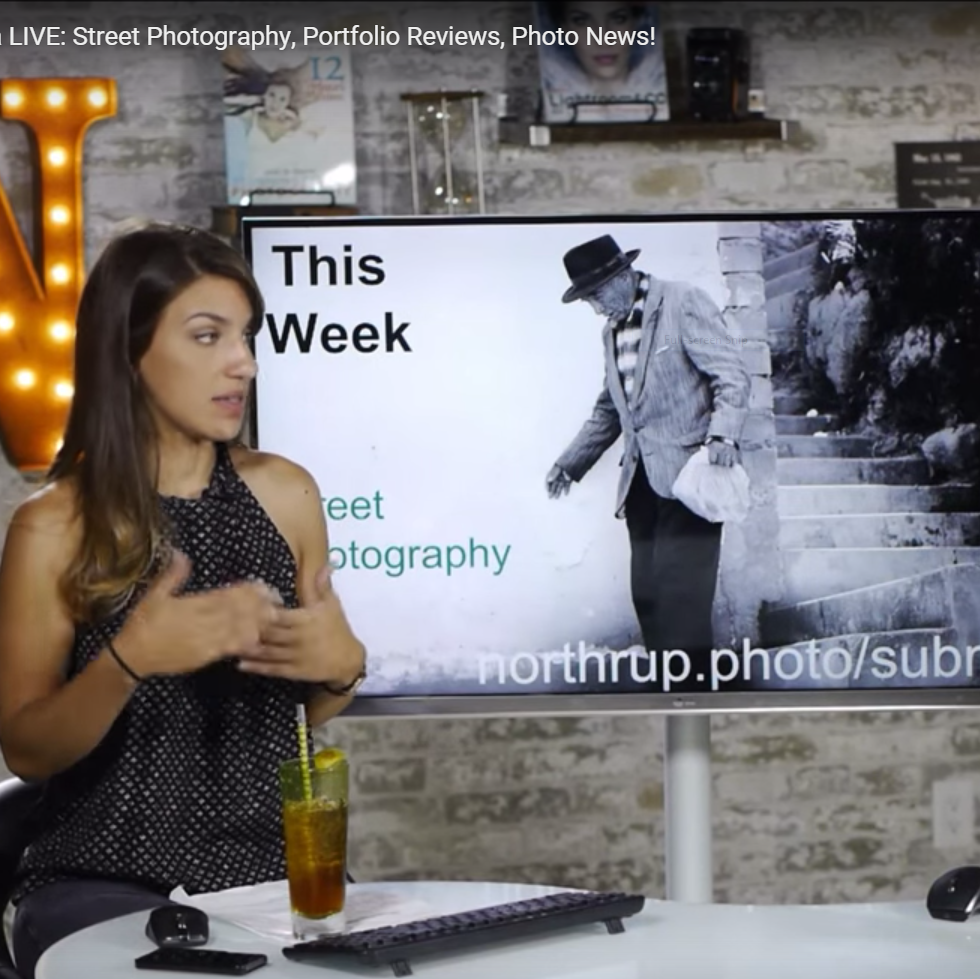 Hey all! Here begins a new blog segment where I discuss the live show and any interesting or noteworthy segments that appear in it. Last week our show was on street photography and we got a ton of great submissions from you fine folks, so thanks for that. We’re always encouraged by the talent of our viewers (and we hope that some of it is due to our tutelage!) So, like every live show subject, the topic needs to be defined. Street photography is candid, most often including a person or people, that serves as a slice-of-life of the area. So there’s that.

First off, Chelsea detailed how I hate gear questions. Not only because I don’t understand half of them, but because Tony and Chelsea have put SO MUCH time into creating a whole book about gear plus some obscene amount of free videos on their YouTube page. If they’ve answered it already, do your research! If they haven’t, it’s because they probably haven’t used the gear in question yet. I’m a woman of efficiency, I don’t like to see time or effort wasted on something that’s been answered before 🙂 Chelsea and Tony are far more patient than I am.

They showed us the new Apple iPad Pro & Pencil, which seems like something way too expensive to lose within a week of owning.

Then there was Socality Barbie, the best new way to mock hipsters and Instagram at the same time! Check it out though, it’s pretty funny.

Chelsea and Tony were drinking Pimm’s and ginger ale, while I was drinking a nice summer shandy by Leinenkugel.

Chelsea suggests a mirrorless for street photography since you can be more discreet with a small camera, and using a 50mm. Tony seconds using a mirrorless with a silent shutter and the viewfinder set to black and white, as well as a 35mm.

We mention “Ron the critic” at minute 27:30, and if you don’t know the reference, please watch this video (we’re sorry):

PhotoNews starts back up at 35:35 talking about megapixels, earthview.withgoogle.com (which is gorgeous) and leads us to discuss “flat-earthers,”and new Zeiss lenses.

Tony upsets nerds the world over starting at minute 42 and gets progressively (regressively?) worse a minute later when he talks crap on Star Wars.

Viewing a portfolio at 46:40, Chelsea says “my gym had that AstroTurf but a kid peed on it” and no one bats an eye.

On to me for some viewer questions, a few more photos, and then Tony tells a hilarious story about (not) getting a shoe shine (1:22:56).

And that’s a show! Join us this Thursday at 5pm New York time for our live show and submit your architecture photo once the show goes live!