Noise is one of the most important factors in a camera’s performance. Noise is digital grain; it’s the ugly speckles that you see in pictures, particularly pictures taken at high ISO, areas of solid red, blue, or green, and shadows. This next figure shows the same scene captured at ISO 100, 400, 1,600, 6,400, and 25,600. Each stop you increase the ISO halves the total light gathered by the sensor, thus doubling the noise in the image. Each subsequent image in the following picture increases the ISO by two stops. Therefore, each image has four times more noise than the previous image. 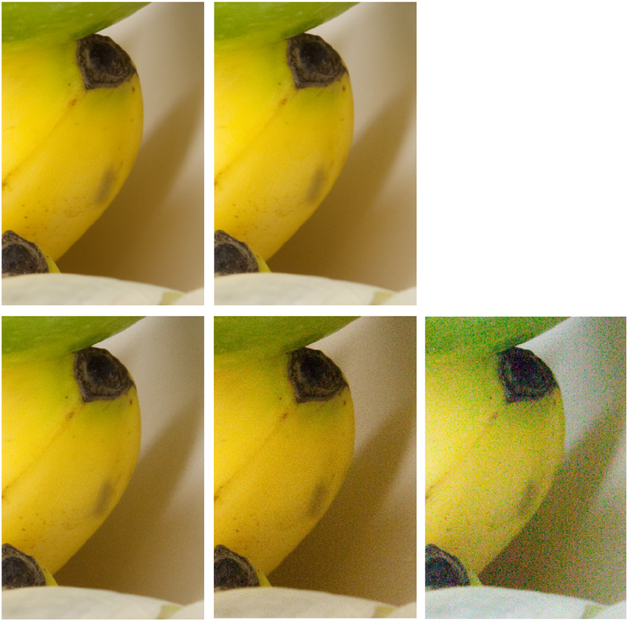 Many photographers really hate noise, and will happily upgrade to a new camera that offers less noise. Unfortunately, new models of cameras don’t offer huge leaps in noise performance—in fact, it takes about five years for cameras (on average) to improve noise by about half a stop.

Like film, digital cameras need a specific amount of light to create an image. Just about any camera can take great, noise-free pictures in bright sunlight. When the sun goes behind a cloud, or you move indoors, you’ll begin to notice the difference between sensors. Digital cameras measure their sensitivity to light using ISO. The following table shows common ISO speeds and when you might use them (without flash).

Higher ISO speeds are one of the greatest features of professional cameras because they allow you to take photos in dimly lit environments without using a flash or a tripod. At ISO 12,800 and higher, you can handhold pictures at night—imagine being able to take pictures of your friends in a restaurant without a flash, or doing night photography without a tripod. Unfortunately, current digital cameras produce so much noise at ISO 6400 and above that you’re still better off using a tripod or a flash and a lower ISO setting whenever possible. The more serious you are about your photography, the less important high ISO speeds will be. Only the most casual photographer will be happy with photos taken at ISO 12,800 on any camera; the noise in the image would simply be too high to sell the picture for any purpose other than, perhaps, photojournalism. However, high ISO speeds typically produce fine results for online use, such as posting a picture to Facebook. In other words, if you want to be able to take snapshots of your friends in a dim bar and put them online, pick a camera with a high maximum ISO. If you want clean, professional results, even in dark environments, you’ll carry a tripod with you, set your camera to ISO 100, and use a long exposure, so the high ISO won’t matter. Stunning Digital Photography will tell you everything you need to know about choosing the right ISO setting for different situations. For now, understand that one of the most important factors to consider when buying a camera is the noise levels at different ISO settings and the maximum ISO speed. The less noise and higher the maximum ISO speed, the less you’ll need that annoying flash. A lower-megapixel sensor with low noise can create a picture of similar quality to a higher-megapixel sensor with high noise. For a detailed explanation, read “Contrary to conventional wisdom, higher resolution actually compensates for noise” at http://dxomark.com/index.php/eng/Insights/More-pixels-offsets-noise!. If you really want to nitpick the noise your camera’s sensor makes, visit http://DxOMark.com. DxO Labs measures the signal-to-noise ratio (SNR) of different camera sensors at different ISO speeds and allows you to compare them. As you’ll see if you examine a camera at the site, the SNR is very high at ISO 100 and 200. At ISO 1600 and above, the SNR is very low—reflecting the noisier pictures you’ll see at higher ISO speeds.

Landscape and still life photographers have the opportunity to use a tripod and long exposures, and thus always have the option of using their camera’s lowest native ISO. Studio photographers have the opportunity to add as much light as they want and also use their camera’s base ISO. For these types of photographers, high ISO performance doesn’t matter, but optimal ISO performance can be very important. You can get the lowest possible noise by using a full-frame camera at its base ISO. Most cameras have a base ISO of 100, and you should use that base ISO whenever possible to take the cleanest pictures. One camera in particular, the Nikon D810, offers an unusually low native base ISO of 64, providing lower noise than is possible on any other camera. Olympus Micro Four-Thirds cameras have a base ISO of 200, and Panasonic Micro Four-Thirds cameras have a base ISO of 160. Because they have higher base ISOs, their very best image quality is noisier than other cameras. Later, this chapter discusses how the Micro Four-Thirds sensor size further reduces the total light gathered at the base ISO, meaning Panasonic’s base ISO of 200 produces images with about the same noise as a full-frame camera (with similar sensor technology) at ISO 800. For many professionals, that means even the most well-lit shots will be too noisy to use commercially. https://www.youtube.com/watch?v=aJFgDEJTIiI Disregard extended ISOs. For example, many cameras with a base ISO of 100 offer an extended ISO of 50. Choosing ISO 50 will not provide better image quality than ISO 100; your image quality will be exactly the same as taking a raw image at ISO 100 and overexposing it by one stop.