Image stabilization, also discussed in the Lens Buying Guide, allows you to hand hold pictures with slower shutter speeds. Many Sony, Olympus, and Pentax have it built into the body. Other manufacturers put it into the lenses. Having stabilization built into the body, known as In-Body Image Stabilization (IBIS), has no benefit for users who use only kit lenses. Since all manufacturers offer image stabilization with their kit lenses, your results will be similar. However, IBIS (illustrated next) has massive benefits to those of us who use fast prime lenses in low-light conditions. Many photographers can get sharp hand-held pictures with a 50mm lens at 1/10th of a second. However, Canon and Nikon photographers can’t buy a stabilized 50mm lens, so they’d have to use a zoom lens with a higher f/stop, requiring them to use a much higher ISO. A stabilized body, such as the Sony a7 II, allows you to use a fast prime lens at f/1.4 or f/1.8 with stabilization. 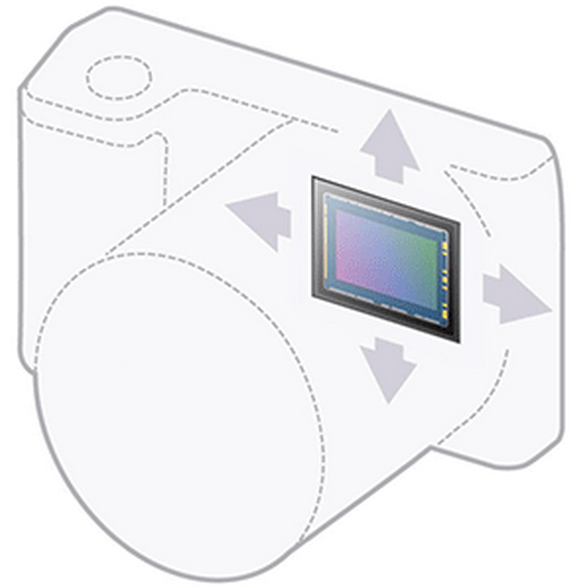 In the real-world, this has allowed me to take handheld night pictures in cities using ISO 100 and shutter speeds of 1/5th or 1/10th. With a Canon or Nikon body and a zoom lens, I would have needed to use an f/4 zoom and an ISO of 400 or 640. All Sony SLT/DSLR bodies have sensor shift image stabilization built in, and any lens you use it with will be automatically stabilized. In theory, this would allow you to save money on lenses, because you wouldn’t need to buy lenses with the image stabilization feature. In practice, Sony lenses aren’t any less expensive than Nikon and Canon lenses. For example, the image-stabilized Sigma 70-200 f/2.8 is the same price for all three systems, about $1,250. Sony’s 70-200 f/2.8 costs about the same as Canon’s image-stabilized lens ($2,000), despite being significantly less sharp. Most Pentax DSLRs and Olympus mirrorless cameras have IBIS, too.