Whether you want to grab snapshots of their kids in the pool or create ethereal underwater portraits, you’ll need to gear to protect your camera. This chapter provides an overview of the different options available for all different budgets. http://www.youtube.com/watch?v=Q92jY_qXDik

Your first choice is to either buy a new camera specifically for underwater use (for as low as $10) or to buy an underwater housing for a camera you already own. Either way, your gear should: 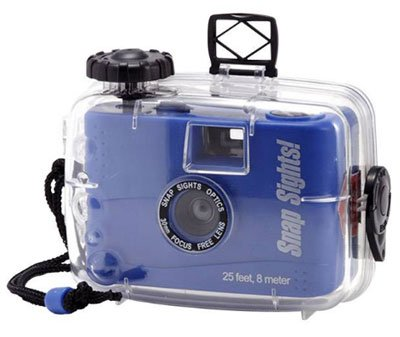 The cheapest way to grab underwater photos is to use a disposable film camera ($7-$20, plus developing costs). It will seem primitive; there’s no LCD display, and you’ll need to wind the film manually between each shot. The camera won’t even have a focusing system. After you take the photos, you’ll have to find a store that still develops film, or send your film to an online service (such as thedarkroom.com). It’s inconvenient, but it’s not a bad idea for a vacation. You don’t have to worry about ruining an expensive camera, and while the quality won’t be great, underwater photos rarely have great quality. 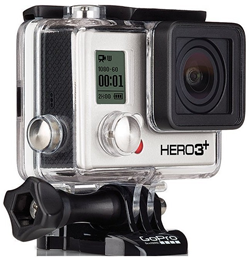 Sports cameras have become very popular in recent years. These compact and durable cameras can go almost anywhere, including underwater. While you wouldn’t want to make a portrait with them, they’re an excellent choice for casual underwater photography. While there are many different models of sports cameras available, the GoPro Hero is my top recommendation. Priced from $200 to $400, all the GoPro models include underwater housings. They’re not perfect, however. Some of the challenges are: 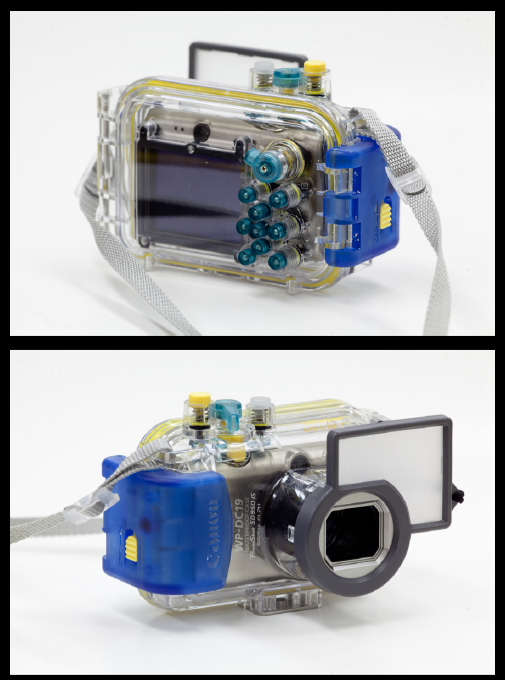 You must find underwater housing made for your specific camera model—that’s the only way the buttons can be reproduced. Every important button and dial on your camera will have a copy on the outside of the underwater housing, with springs and levers that push your camera’s buttons when you push the corresponding button on the camera housing. The murkiness of water won’t allow you to take advantage of your DSLR’s high image quality, anyway, so consider starting your underwater photography with an underwater housing for a point-and-shoot camera, as shown in the following figure. Purchase an underwater housing made by your camera manufacturer. Canon, Nikon, Sony, and Fuji all make underwater housings for their popular point-and-shoot cameras. Check eBay and see if you can find a good price on a used housing. If you have a Nikon, Fantasea Line might make a housing for your camera. Point-and-shoot housings typically add a diffusing screen in front of the camera’s flash, as shown in the previous picture. This will help just a bit, but they’re not bright enough to light up subjects in deep water. Also, because the flash is placed so closely to the lens, you’ll get backscatter, which causes particles in the water to reflect the flash back to the camera. If you go any deeper than thirty or forty feet (or less if it is not sunny or the water is not clear), you’re going to need external underwater strobes, which are flashes that attach to the bottom of the housing using the tripod connector and are triggered when your camera’s built-in flash is fired. You might also need to add weights to your case. While having the case float is helpful when you’re snorkeling, when you’re trying to dive, a floating case will be fighting you the whole way down. 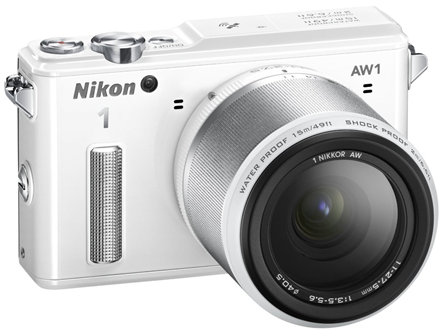 Nikon makes two interchangeable lens cameras: the film Nikonos (starting at $150 used) and the digital AW1 ($750 new). Because they’re built specifically for underwater use, they’re less bulky and easier to use underwater. You can use either camera above water, too, though I’d only recommend them for the most casual above-water photographers.

Camera makers don’t make underwater housings for DSLRs. Instead, check out Aquatica, Sea and Sea, AquaTech, and my favorite (for the lower prices), Ikelite. You will need: 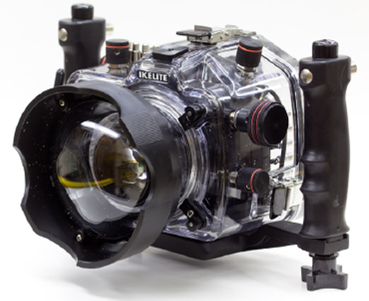 Tech details: Dome ports act as an additional optical element by shaping the water in front of your lens into an arc. This helps to reduce refraction, distortion, and aberrations caused by water. It also requires the lens to focus very closely, as if you were taking a picture of an image projected on the inside of the dome itself. That’s why you need a macro lens or a diopter when using a dome port. Flat ports don’t correct the problems that occur when light must pass through air, water, and then back through air again inside your housing. The distortion and aberration are unacceptable when using a wide-angle lens, but are mostly hidden when using a telephoto lens. That’s why flat ports are limited to telephoto macro lenses.

As you can imagine, all this gear is expensive. If you’re using strobes, you’ll spend more than $3,000, and you can easily spend $5,000. It’s also heavy—you won’t want to carry the gear around on land.