Make sure you buy lenses that match your camera mount. Canon, Nikon, and Sony each have different mounts and require lenses built for their mount. You can buy third-party lenses from Sigma and Tamron, but just be sure they’re made for your camera type. The description for third-party lenses will say something like, “for Canon SLRs” or “for Nikon SLRs.” Here’s where it gets confusing: Canon and Nikon both sell camera bodies with different sensor sizes: compact and full-frame. Full-frame lenses are designed for use with the larger full-frame sensors, so the lenses themselves are much larger.

The Canon lens mount is known as EOS. Originally introduced in 1987, all recent Canon lenses and bodies use the all-electric EOS mount. However, that doesn’t mean that all EOS lenses and bodies will work together. Within the EOS DSLR family, Canon has two lens varieties:

If you have a full-frame Canon DSLR, such as a 5D, 6D, or 1D, you can only use EF lenses. You cannot use EF-S lenses. If you have a Canon compact DSLR, such as a T2, T3, T4, 7D, Rebel, Kiss, or anything with more than two numbers in the name (like 60D or 600D), you should choose Canon EF-S lenses whenever possible. Canon EF-S lenses are optimized for the compact sensor. However, if you have a Canon compact DSLR, you can use EF lenses. However, it’s rarely the right choice. Because EF lenses are designed for use on a full-frame sensor, your compact DSLR sensor only records the middle of the image. Basically, using an EF lens on a compact DSLR is like zooming in 1.5 times (for Nikon) or 1.6 times (for Canon). It also means you’re spending more money and carrying around a heavier lens than you can take advantage of. For those reasons, I don’t recommend using EF lenses with Canon compact DSLRs to casual users. More serious compact DSLR users will probably need to buy full-frame EF lenses for portraits, sports, and wildlife, however, and the $100 Canon 50mm f/1.8 lens, also known as the “fantastic plastic” or “nifty fifty” is a great choice for any camera. Lens descriptions are filled with numbers and acronyms that are baffling to all but the most hardened photographers. Here’s a typical Canon APS-C lens description diagrammed:

For this lens, every part of the description is important:

A typical Canon full-frame professional lens adds a couple of elements to the description: 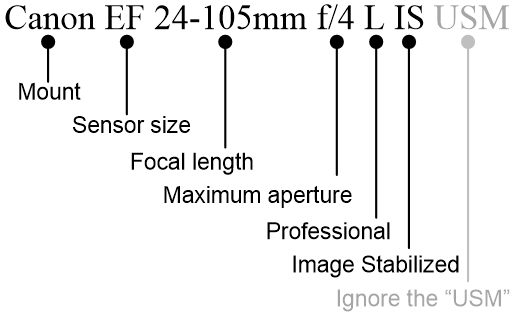 Because the sensor size is “EF,” rather than “EF-S,” the lens is designed for full-frame cameras. If you use it on an APS-C camera, multiply the focal length by 1.6X to create an effective focal length of 38-168mm. The “L” means it’s an expensive professional lens. The “USM” can be ignored; it’s just an acronym for Ultrasonic Motor—Canon’s quiet and fast-focusing motors from the late 1980s.

Nikon’s current lens system, the F-mount, was introduced in 1959. Because it was introduced so much earlier than Canon’s, the original design relied on mechanical linkages between the body and lens to support focusing the lens and changing the lens aperture. These 50-year-old design elements are still present on many Nikon lenses. Considering how much has changed about photography in the last 50 years, it’s fairly remarkable that you can use many of the 400 F-mount lens from the last 50 years on your modern DSLRs (though you probably won’t want to). With that said, there are countless compatibility issues between old lens and new bodies, and between new lenses and old bodies,  so you should refer to the manuals included with your newer equipment before trying anything. Like Canon’s, Nikon’s F-Mount system has separate lens varieties for compact and full-frame cameras:

Either type of lens can be used on any Nikon body. However, if you have a full-frame Nikon, you will definitely want to choose FX lenses. If you use a DX lens on a full-frame camera, you will only be using a small part of the camera’s sensor, losing a great deal of detail. If you have a compact Nikon DSLR, you can use either type of lens without serious penalty, however, you should choose DX lenses whenever possible. FX lenses will be unnecessarily large, heavy, and expensive because their design is optimized for a full-frame sensor, and your compact sensor will only capture the center of the image from the lens. Using an FX lens on a DX camera is like zooming in 1.5 times, so a wide-angle lens becomes a standard lens, and a standard lens becomes a telephoto lens. For those reasons, I don’t recommend using FX lenses with Nikon compact DSLRs to casual users. More serious compact DSLR users will probably need to buy full-frame FX lenses for portraits, sports, and wildlife, however, and the $100 Nikon 50mm f/1.8 lens, also known as the “fantastic plastic” or “nifty fifty” is a great choice for any camera. In addition to understanding DX and FX lenses, you also need to understand AF and AF-S lenses:

The following photo of a Nikon D7000 shows the autofocus motor linkage in the lower-left corner of the lens mount: 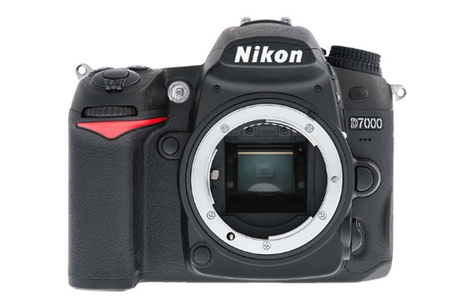 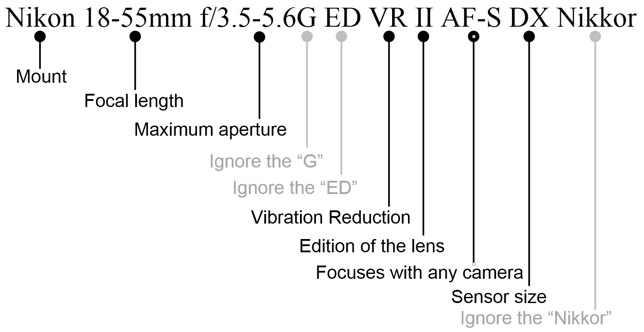 The useful information is:

Notice that I’ve asked you to ignore several parts of the description:

You might see other acronyms in Nikon lens descriptions, all of which you can ignore:

The Sony Alpha’s A-type bayonet mount dates back to 1985, when it was introduced by Minolta. In 2006, Sony bought Minolta and designed their new camera bodies to work with the Minolta A-mount system. As a result, new Sony DSLRs work with many Minolta lenses from the last 30 years, and vice-versa. Compatibility isn’t always 100%, so check your camera’s documentation and search the Internet to determine whether any given combination will give you the features you need. Like Canon and Nikon, Sony makes lenses optimized for cameras with compact sensors as well as full-frame lenses. Those lenses designed for cameras with compact sensors use the DT designation, which stands for Digital Technology. Like Nikon (and unlike Canon), you can you DT lenses on full-frame bodies, but you should avoid it whenever possible. In the current Sony DSLR lineup, the a99 is the only full-frame camera. Therefore, if you have any other Sony body (the a58, a65, or a77) you should buy DT lenses whenever possible. If you have an a99, be sure to avoid DT lenses. Here’s a typical Sony lens description diagrammed:

The useful information is:

You might see other acronyms in Sony lens descriptions:

Unlike the other major brands discussed here, Micro Four-Thirds isn’t a company—it’s a standard that many different companies (including Olympus and Panasonic) create bodies and lenses for. Unlike Canon, Sony, and Nikon, the Micro Four-Thirds brand only has a single sensor size. This makes choosing lenses much easier, because any Micro Four-Thirds lens will work without you having to worry about cropping.